The Battle of Glorieta Pass 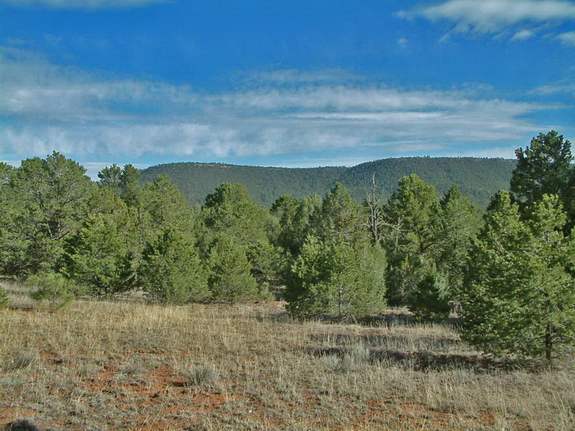 The "Gettysburg of the West"

The Battle of Glorieta Pass, fought from March 26 to 28, 1862 in northern New Mexico Territory, was the decisive battle of the New Mexico Campaign during the American Civil War. Dubbed the "Gettysburg of the West" (a term that "serves the novelist better than the historian") by some authors, it was intended as the killer blow by Confederate forces to break the Union possession of the West along the base of the Rocky Mountains. It was fought at Glorieta Pass in the Sangre de Cristo Mountains in what is now New Mexico, and was an important event in the history of the New Mexico Territory in the American Civil War.

There was a skirmish on March 26 between advance forces from each army, with the main battle occurring on March 28. Although the Confederates were able to push the Union force back through the pass, they had to retreat when their supply train was destroyed and most of their horses and mules killed or driven off. Eventually, the Confederates had to withdraw entirely from the territory back into Confederate Arizona and then Texas. Glorieta Pass thus represented the peak of the campaign.

The Confederacy had organized the Confederate Arizona Territory in 1862, a claim that included the southern halves of modern Arizona and New Mexico, after secession moves by residents. The territory had its capital at Mesilla, outside modern Las Cruces. The strategic aim was to capture the gold and silver mines in California and Colorado Territory and the ports in Southern California.

The commanders of the New Mexico Campaign were the Confederate Brigadier General Henry Hopkins Sibley, and the Union Colonel Edward Canby. Sibley, whose mission was to capture Fort Craig, outmaneuvered Canby at the Battle of Valverde in February and drove Canby back to his fort, but failed to force Canby's surrender. Instead, Sibley bypassed the fort, and advanced up along the Rio Grande Valley to seize Santa Fe on March 10. Canby remained at Fort Craig to cut Sibley's logistical support from Texas and to await further reinforcements before resuming the offensive. Sibley set up his headquarters at the abandoned Union storehouse at Albuquerque.

In March, Sibley sent a Confederate force of 200 to 300 Texans under the command of Major Charles L. Pyron on an advance expedition over the Glorieta Pass, a strategic location on the Santa Fe Trail at the southern tip of the Sangre de Cristo Mountains southeast of Santa Fe. Control of the pass would allow the Confederates to advance onto the High Plains and to make an assault on Fort Union, the Union stronghold along the invasion route northward over Raton Pass. Sibley also intended for six companies under the command of Colonel Tom Green to block the eastern end of Glorieta Pass, turning any Union defensive position in the Sangre de Cristos. 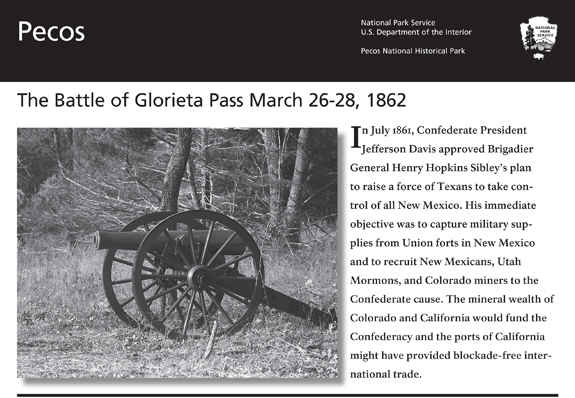 Prior to the battle, Union forces performed a forced march from Denver, over Raton Pass, to Fort Union, and then to Glorieta Pass, covering the distance of 400 miles in 14 days. Combat commenced shortly after their arrival at the battlefield, leaving them little time to recuperate.

Pyron's force of 300 camped at Apache Canyon, at one end of Glorieta Pass, leaving a picket post of fifty men at the summit of the pass. Chivington led 418 soldiers to the Pass and on the morning of March 26 moved out to attack. After noon, Chivington’s men captured the picket post and then found the main force behind them. Chivington advanced on them, but their artillery fire threw him back. He regrouped, split his force to the two sides of the pass, caught the Confederates in a crossfire, and soon forced them to retire. Pyron retired about a mile and a half (not quite two and a half kilometers) to a narrow section of the pass and formed a defensive line before Chivington’s men appeared. The Union forces flanked Pyron’s men again and punished them with enfilade fire. Pyron ordered another retreat, but the withdrawal of the artillery caused the Confederates to become disorganized and start fighting in separate clusters of men. Chivington ordered a mounted Colorado company to make a frontal charge against the artillery; this charge succeeded in capturing several Confederates and scattering the rest. Not knowing if Confederate reinforcements were nearby, Chivington then retired and went into camp at Kozlowski’s Ranch to await Slough with the main body. His small victory was a morale booster for Slough's army.

No fighting occurred the next day as reinforcements arrived for both sides. Scurry's troops arrived at 3 am on March 27, swelling the Confederate force to about 1,100 men and five cannons; as senior officer present, Scurry took command of the entire Confederate force. Thinking that Slough would attack again and expecting Green to arrive in the Union rear at any time, Scurry chose to remain in place for the day, digging rifle pits. Slough arrived early in the morning of March 28 with about 900 more men, bringing the Union strength to 1,300. 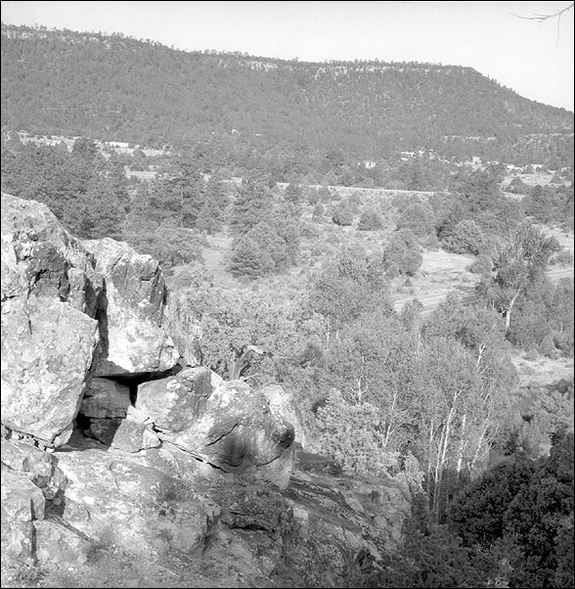 Both Scurry and Slough decided to attack on March 28 and set out early to do so. Expecting the Confederates to remain in Apache Canyon, Slough sent Maj. Chivington with two infantry battalions, under Lewis and Wynkoop, out in a circling movement with orders to go hide out at Glorieta Pass and hit the Texans in the flank once Slough's main force had engaged their front. Chivington did as ordered and his men waited above the Pass for Slough and the enemy to arrive. But instead of remaining at Apache Canyon as Slough had expected, Scurry advanced down the Canyon more rapidly than Slough had anticipated. Scurry expected the Union force was retreating back to Fort Union; he intended to attack them until Green arrived. One cannon and a small detail was left at Johnson's Ranch, the rest of the Confederate force, with more than a thousand men, marched eastwards along the Santa Fe trail.

When Slough found the Texans so far forward, he launched an attack, hitting the Texans around 11:00 am about a half mile from Pigeon's Ranch. A provisional battalion of four companies from the 1st Colorado under Lt. Col. Samuel Tappan, supported by both batteries, deployed across the trail. The Confederates dismounted and deployed in a line across the canyon but the terrain caused some companies to become intermingled. Tappan was initially successful in holding his ground for a half hour, but the Confederates' numerical superiority enabled them to outflank the Union line by noon. The Federals were thrown back in confusion before taking position around the adobe ranch buildings. Slough reformed his men a few hundred yards closer to Pigeon's Ranch, with four companies under Tappan and an artillery battery on a hill to the left, the other battery supported by two companies in the center across the road, and the other two companies on the ridge to the right.

Scurry then launched a three pronged attack on the Union line: Pyron and Raguet were ordered to attack the Union right, Shropshire the Union left, with the remainder of the Confederate force under himself attacking the Union center, supported by the artillery. The attack on the Union left was routed, with Shropshire killed, the attack in the center stalled, while the artillery was forced to withdraw after one cannon was disabled and a limber destroyed. The attack along the line then stalled, with the Confederates fighting by squads "with a desperation unequaled by any engagement of the war." At around 3:00 pm, the Confederates managed to outflank the Union right, but Raguet was mortally wounded. From the ridge (known after the battle as "Sharpshooters Ridge"), the Confederates started to pick off the artillerymen and infantry below them, while Scurry started to press the Union center again. This made the Union position untenable, forcing Slough to order a retreat; Tappan organized the companies on the left flank into a rear guard. Slough then reformed his line a half mile east of Pigeon's Ranch, where both sides skirmished until dusk. Slough retreated back to Kozlowski's Ranch, leaving Scurry in possession of the field.

Meanwhile, the leader of the New Mexican volunteers, Lt. Col. Manuel Chaves of the 2nd New Mexico Infantry, informed Chivington that his scouts had detected the Confederate supply train nearby at Johnson's Ranch. After watching them for an hour, Chivington's force descended the slope and attacked, routing or capturing the small baggage-guard with few casualties on either side. They then looted and set afire eighty supply wagons and spiked the cannon, and either killed or drove off five hundred horses and mules before returning to Kozlowski's Ranch. With no supplies with which to sustain his advance, Scurry had no choice but to retreat to Santa Fe, the first step on the long road back to San Antonio, Texas. The Federals thereby stopped further Confederate incursions into the Southwest. Glorieta Pass was the turning point of the war in the New Mexico Territory.

One of Chaves' scouts was Anastasio Duran. Duran was stationed with the Union Army at Fort Union. He was a resident of Chaperito, New Mexico. Duran was considered a "Comanchero" by U.S. Army officers; and was renowned for his hunting skills. He was intimately familiar with the terrain. Duran was the lead scout that led Union forces to attack Confederate forces behind Confederate lines at the Battle of Glorieta Pass.

Parts of the battlefield are preserved in the Pecos National Historical Park.

Effects of the Federal victory

In the end, the Battle of Glorieta Pass proved remarkably important. First, despite the fact that the Confederates took the field, they were forced to retreat back to Santa Fe due to the destruction of their supplies and eventually abandon New Mexico Territory. Second, the battle at Glorieta foiled Sibley's plan to obtain his key objective: the capture of the major Federal base at Fort Union. The fall of Fort Union would have broken Federal resistance in New Mexico, and compelled Union forces to retire north of Raton Pass and back into Colorado Territory.

In the end, the dreams of a Confederate stronghold in the Southwest were impractical; New Mexico did not provide enough food or sustenance for any prolonged Confederate occupation. Furthermore, the approach of the Federal "California Column" eastward through the New Mexico Territory during the summer of 1862 would have seriously jeopardized Confederate control of the region.